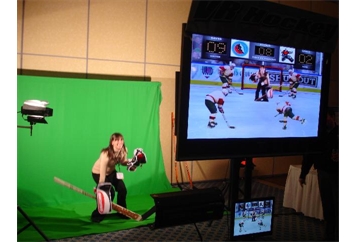 Virtual Hockey Game (VR 2 Hockey Game) or Virtual Goalie Game, no matter what you call it, is an immersive interactive video game so intense it is in the Hall of Fame. Through the magic of Chroma-key technology and with all the fun of sports, players just can not get enough of this game. Virtual Reality Hockey places the player in the goalie position as hockey greats shot slap shot after slap shot on the player. The player’s quick moves and outstanding saves are all part of the game as the virtual puck interacts with the players motions. Yes, it seems impossible to have this much fun and never need a face mask, but this is the best it gets in hockey interactive sports games. Gretzky never had this much fun. Real goalie gear, sticks and everything but the puck are included along with a 50” Plasma for the audience to view the play by play action. “It’s a kick save and a beauty” says any event planner that requires real hockey action. VR Hockey makes for a great challenge or networking environment while guest gather to watch the large screen and take their turn in a fun and interactive event. So “put the biscuit in the basket” and order your VR Hockey before they are all gone. Limited systems are available worldwide.

No Events Created in this Location

Please create an event to save items.
- +
Quantity